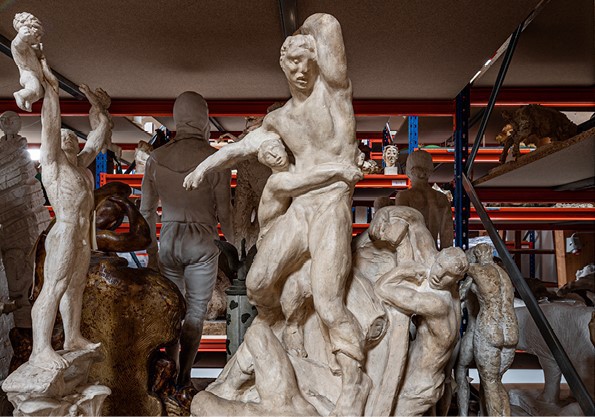 What would Denmark’s capital look like if a huge colourful explosion of a gateway had been built right the middle of Nørreport Station? Why was the controversial sculpture Great Robert rejected in both Aarhus and Copenhagen? Would the patients at Sønderborg Hospital have felt better if a large, red copper pigeon had been installed on the forecourt? What stories, what towns and what realities would we have inhabited if all of this had become reality instead of being rejected and confined to a desk drawer?

Ad Acta – Archived Visions is an ambitious exhibition and total installation in one. Visitors are enveloped by a sensory narrative bringing new perspectives to public space, and asking what is considered valuable – and who decides. The artists’ visions in the archived works are unfulfilled, and as such the exhibition functions as an X-ray image of the society they were created in and the cultural political climate they were part of.

Ad Acta – Archived Visions is curated by Peter Ole Pedersen in collaboration with KØS Museum of Art in Public Spaces.

The Art of the Overlooked
Interest in the work of Lasse Krog Møller has risen in recent years, during which he has exhibited at Aarhus Kunsthal, West Jutland Art Pavilion and Den Frie Centre of Contemporary Art. KØS is the first major museum to hold a solo exhibition by the artist.

Lasse Krog Møller has a unique approach to art in public space. Whereas many artists use public spaces as a backdrop to display their works, Lasse Krog Møller sees cities and their streets as a library packed with stories about people, culture and values. It is small, quirky and overlooked objects that fascinate Lasse Krog Møller, something clearly reflected in his art practice. His is the approach of an archivist and anthropologist conducting fieldwork on the streets. Here he collects hair ties, lost mittens and laminated badges. He takes photographs of every single hair salon on the long Copenhagen street of Amagerbrogade, and photographs sections of blue sky seen above different towns.

The overlooked, discarded and marginalised that are ever-present in our everyday lives are always at the heart of his works and exhibitions, which provide intimate insight into the life of the individual, public space or life on the street by combining wry humour, curiosity and a sharp critique of the establishment. And Ad Acta – Archived Visions is no exception.

Whilst the exhibition at KØS is primarily based on works in the museum’s collection, here too Lasse Krog Møller has pursued his passion for collecting. He has been on ‘fieldtrips’ in Køge, and the artefacts he has found on the streets are now on display as a postcard collection in the exhibition.

Mess, Dust and the Future
The encounter between KØS and Lasse Krog Møller is a one-off, and stages the museum’s collection in new ways akin to science fiction.
One section of the exhibition consists of watercolours that depict an imaginary world in which unrealised artworks, sculptures and buildings from the archive have been realised. The watercolours are based on the works the artist has selected from the collection, and with equal portions of humour and provocation in the accompanying texts Lasse Krog Møller tells stories of how city life could have been. The exhibition also includes a total installation where visitors are guided through a dark, winding archive full of display cases, filing cabinets, boxes and artefacts from the museum’s collection.

With Ad Acta – Archived Visions Lasse Krogh Møller asks how the artworld and society at large evaluates art and culture, and what realities cultural heritage creates or rejects. In the artist’s universe everything has a story, a story that can easily lie buried in the archive or found at street level. By staging unrealised and therefore ever-young works, his exhibition speaks to the future and the ways in which it is shaped and defined on a daily basis by artists, politicians, and the rest of us.