REALISTIC UTOPIAS
AN ARCHIVE OF THE FUTURE 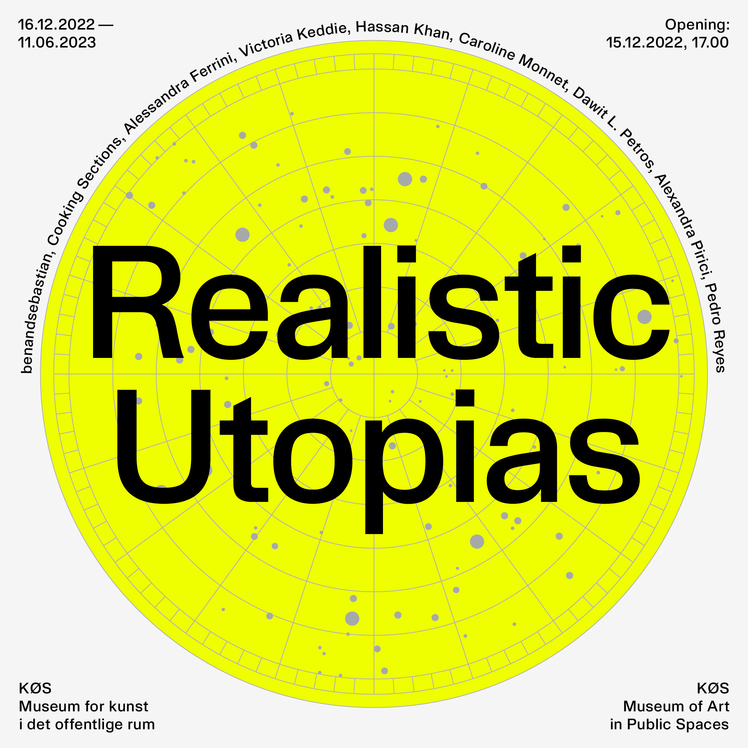 KØS presents Realistic Utopias, a group exhibition conceptualized as a journey of exploration, where you as a visitor are invited to investigate a bundle of artistic visions of public art for the future, imagined by artists from all over the world.

Realistic Utopias consists of ten different art projects created by nine artists who were born, have lived or are living in various geographical regions of the world. Each artist presents an unrealized or partly realized project or idea for an art installation conceived to be part of the public space of different geographies. At first, the projects may seem to have a utopian and unrealistic vision for the current world and the spaces people are meant to share. However, these are not sketches, but visions, ideas and projects that exist in another time: in the future, where they await the right societal, political and economic conditions to be realized.

The term utopia was coined in 1551 by the English philosopher and politician Thomas More in his description of an imaginary island where only the most perfect legal, social, and political conditions existed. Rather than addressing what those supposedly ‘perfect conditions’ would look like today, the exhibition emphasizes art’s potential to inspire people to reflect upon and shape them. Through these art projects, the exhibition presents the future as a reachable dimension we can explore across time.

By inviting artists from different parts of the world, the exhibition is intended to question the accustomed European notion of public space; a notion which is rooted in a Western perspective and anchored to the ancient Greek term and idea of the ‘agora’, which refers to the central urban square in ancient Greek cities and a place where political decisions are made. The exhibition thus questions not only what ‘public space’ signifies or represents in, for example, Egypt, Italy, Denmark, Eritrea, Mexico, and on Indigenous land, but also how the notion of ‘public’ changes once we change the political, cultural, geographical perspective from which we observe it.

This exhibition is curated by Irene Campolmi.

In tandem with the exhibition KØS presents a public programme including a series of discursive and performative events that reflect, question and expand the geographical, cultural and political notion of public spaces today and the potential role of art in transforming them.

The exhibition is sponsored by:
The Mexican Embassy in Denmark

Realistic Utopias is realized with generous support from: