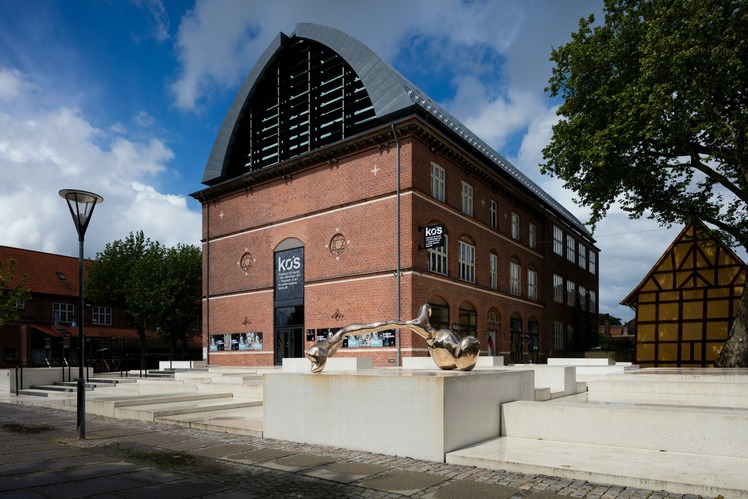 A Kassen’s bronze sculpture Bronze Pour (Køge Harbour) for the square in front of KØS was created in an instant. Or, more accurately, the shape of the sculpture was created in an instant, whereas the overall inception of the work has taken rather longer. The sculpture was created on the basis of a ‘bronze pour’, where the high-contrast encounter between liquid bronze and the cold waters of the Køge Harbour formed the outline of the final sculpture on a diminutive scale. The figure was subsequently enlarged, presented as a model, and selected to be cast in bronze. The inauguration of the final sculpture in the square in front of KØS constitutes the third and final stage of this special exhibition where A Kassen’s project – to create a site-specific sculpture for KØS and all of Køge – has gradually unfolded before the eyes of museum audiences over the course of six months.

Uniquely, KØS has had the opportunity to present A Kassen’s sculpture project no less than three times. The first time was in late January this year, where several hundred people watched as bronze foundry specialists poured molten bronze, heated to 1,000 degree Celsius, into Køge Harbour. Each of the hundreds of randomly shaped bronze pieces reclaimed from this process had the potential to become the final sculpture. A few days later A Kassen met at KØS, where the artist group conducted a close scrutiny of the bronze pieces, ultimately selecting six of them. These figures were 3D scanned and enlarged before being exhibited at KØS as possible models for the final bronze sculpture.

The exhibition that opened in early March marked the second time that A Kassen’s sculpture project was presented at KØS. The event offered the general public an opportunity to meet the artists, and it was splendid to see how a keenly interested audience entered into conversations with the artists about the six models, their distinctive forms, and the sculpture’s genesis. At KØS, we strongly felt that the public, not least the people of Køge, eagerly accepted the invitation to provide input to the artists. We are very pleased that A Kassen seized this opportunity to experiment with audience involvement for their exhibition here at KØS.

The artist group A Kassen comprises Christian Bretton-Meyer (b. 1976), Morten Steen Hebsgaard (b. 1977), Søren Petersen (b. 1977) and Tommy Petersen (b. 1975). The artists first met at the Royal Danish Academy of Fine Arts and have collaborated since